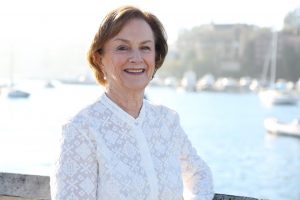 Respected businesswoman, educator and feminist activist Wendy McCarthy AO will present the second annual Margaret Henry Memorial Lecture at City Hall on October 23. The lecture is titled Taking a Long View – 50 Years as a Change Agent and McCarthy will speak about her commitment to shifting the concept and reality of being female in Australia and globally.

McCarthy was a co-founder of the Women’s Electoral Lobby, chief executive of The Sydney Community Foundation Women’s Fund and continues to advocate for women in public life. She has campaigned for abortion reform in NSW for the past 50 years and was chair of the Pro-Choice Alliance. In the lead up to legislative change earlier this month, McCarthy was one of 60 Sydney women who took to Facebook daring NSW police to arrest them for having had “illegal” abortions.

“Despite decades of progress, and high-profile women in political life, women are under-represented as senior leaders in many sectors,” said McCarthy.

“The balance sheet is positive in terms of the change agenda of the women’s movement, but the cultural change that maintains it has not happened. Women are still falling short,” she said.

The inaugural lecture was presented in 2018 by Renew Newcastle founder Marcus Westbury and was organised by family and friends of Margaret Henry who died in 2015. The former University of Newcastle academic and Newcastle City Council deputy mayor was well-known for leading community campaigns on a range of issues including heritage conservation, education, environmental protection, education and the preservation of the heavy rail line and Laman Street figs. In 2016, Henry was posthumously made a Freeman of the City, Newcastle’s highest civic honour.

Henry’s eldest daughter, Catherine, said the lecture provided an opportunity to honour her mother and McCarthy was a clear choice for a speaker given the impact of the #metoo movement.

“Mum and Wendy knew each other and both are recipients of an Edna Ryan award, which are presented to feminists who make a difference to the lives of women,” Ms Henry said.

Said McCarthy: “I have always had enormous respect for Margaret and there were many connecting points in our lives. I’m honoured to be presenting this year’s lecture.”

The lecture will be held from 6.30pm on October 23 in the Banquet Room in Newcastle City Hall. Tickets are $15/$20 https://www.trybooking.com/BFMUS

Media information: For more details about the lecture and to arrange an interview with Wendy McCarthy please contact Craig Eardley on 0437 477 493 Catherine Henry 0417 292 700.